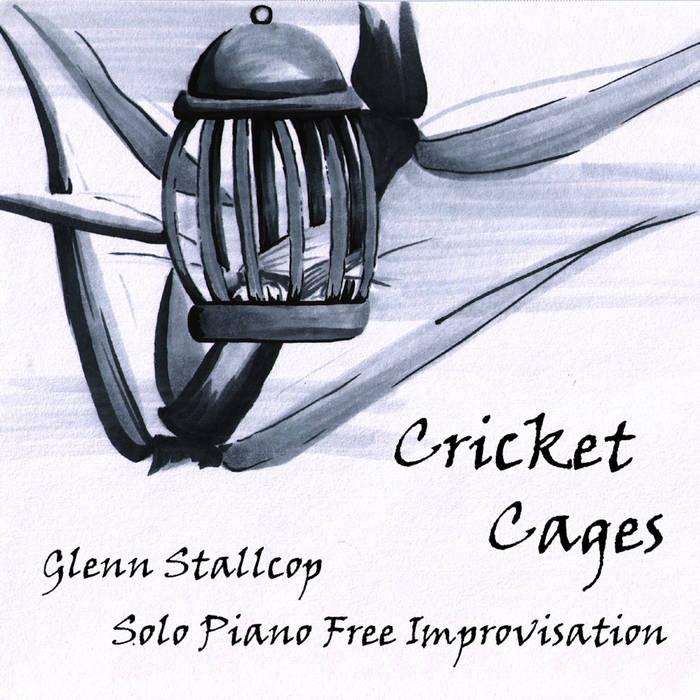 The cricket cages
capture with humble silence
songs of forever.

This is one of two CD's I recorded in the early summer of 2003, the other being DANDELION SEEDS. I was supposed to be composing a set of songs for my sister, Eleanor Stallcop-Horrox, but I found myself facing creative block. I turned instead to recording some improvisation. It went so well, I kept it up for four or five weeks. Eventually, I turned again to working on the songs, and though I didn't use any of these improvisations as the basis for the songs, I did get my creative juices flowing and completed the songs later that summer.

I have always had a soft spot for crickets. Growing up in Seattle, we did not have crickets. I first saw crickets on a vacation when I was about 10 years old at the beach. I had never heard them sing at night before. I caught a few of them and brought them home in a jar. They dutifully sang for me every night in my room for about two weeks.

When my wife and I bought our home in Phoenix, there were so many crickets outside at night, it looked like the ground was moving. But we never sprayed, and eventually the lizards, geckos, and birds evened things out. Even when we caught a cricket inside – they give themselves away – we would always “export” them outside rather than step on them. (Some people think they are pests!)

I didn't see my first cricket cage until I was an adult, in an import shop. The Chinese, I discovered, have been making them for 1500 years, for children to hold their singing crickets, and eventually just as art objects out of wood, bone or ivory, and even brass. Crickets are noted subjects of classical Chinese poetry, and have taken on a special place in Chinese culture. I understand they also spend quite a lot of money and effort wagering on "fighting" crickets. The cricket cages themselves have developed a reputation for good luck and are passed down through generations.

When I was putting together the music for this CD, I noticed that music with a “cricket-like” quality appeared quite often in these improvisations. Though it did not permeate the music, really, it happened often enough to become the focus of the album. The separate songs became cages for these musical crickets. I also use the cricket cages as a way of introducing other emotional subjects such as in Cricket Cages “Received as an inheritance”, “Forgotten”, or “As a memory”.

Though my music is freely improvised, it is more classical than jazz. I am a classical musician and composer by trade, and I am more prone to spontaneously compose while improvising rather than “grooving” as a jazz musician would. I treat rhythm and harmony freely and in a rather complex fashion at times. However, my music is always expressive. It is the direct emotional link and spontaneous outpouring that drew me to improvisation in the first place.

I also use improvisation as a spiritual practice. The act of improvisation forces me to concentrate all of my attention on what I am doing, not on what I just did or what I am going to do. As such, my music always has a certain meditative quality, a certain inner stillness, even when it gets busy. It is rather like a nice personal conversation on a warm, quiet, peaceful summer evening . . . with the sounds of crickets.