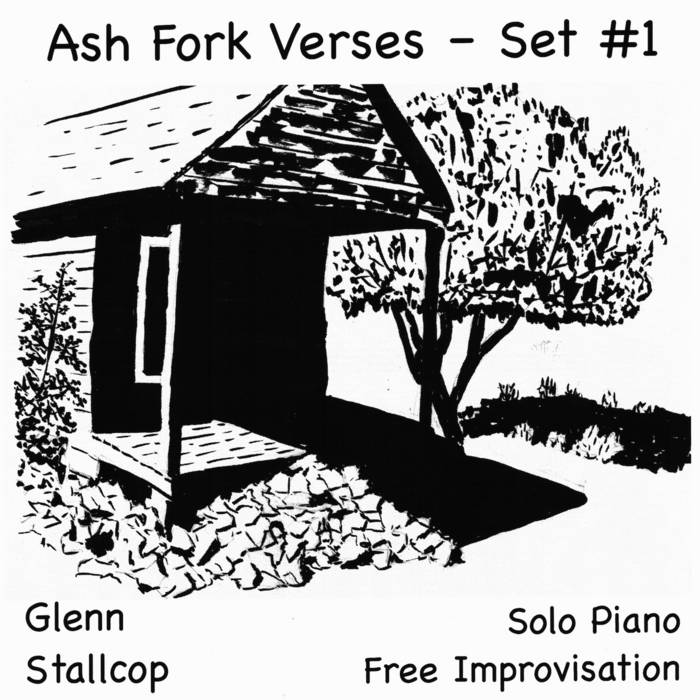 In October of 2008, I had a rare week off. I grabbed my keyboard and laptop and drove to my cabin in the juniper forest a few miles south of the tiny town of Ash Fork, Arizona. It is "off the grid" so I had to bring battery power. It is so quiet up there, and the fall and spring are spectacular! I would record every morning till my batteries drained, then charge them at night when I turned on the generator. The experience changed my music forever.

My improvisations were long, between 10-20 minutes on average, but they tended to group themselves into sections. I decided to make the sections into "movements" so that the listening experience would make more sense. This is the only way I have ever found to actually have a reason to group improvisations into movements. To emphasize this trait, I created poems (about the Ash Fork property) with each line of the poem become a title for one of the movements. To play the entire "poem", you need to play the entire improvisation.

The collection, Ash Fork Verses, has been compiled into three sets, which are being released separately.

This first poem of Set #1 actually happened one morning about 4am. When I heard the crunching, which was amazingly loud in the quiet of the pre-dawn stillness, I went outside and saw a mouse munching on the side of my house until he or she bolted!

The second poem is about cattle, which still roam free over much of the American West. Many graze on public lands (a source of continuing controversy), but some ranchers also own grazing rights to private lands owned by others. Such is the case with our property. There is a cattle tank (small dammed stream) on the edge of our property. The stream only runs when it rains. Sometimes there is quite a bit of water in the tank, other times it is dry. Sometimes it is dry for months. The cattle, usually in small groups, must make do. We can fence the property to keep the cattle out, and some do, but most do not. I rather enjoy their lowing and ambling by every now and then. But when it is dry, especially in late spring, I feel for them, and sometimes they don't survive.

The third poem is about a ceiling fan. It is very dusty in Ash Fork (all of Arizona really), with the humidity often in single digits. From my loft studio, I see the top side of the living room ceiling fan. The top side of the blades, which is always covered with dust, shows shiny grooves. The only thing I could think of to cause the grooves were insects, of which there are plenty! It wasn't until recently that I discovered that during very hard rains our roof leaked! The moth trails were actually caused by water drops. Roof repairs have caused my moth trails to become overgrown with dust again.

The last poem in this set refers to the first poem. Hansel and Gretel are cute, but I didn't want them running around my house.